Dominican cuisine is one of the most diverse in the Caribbean region and is considered the result of the confluence of dissimilar cultures such as Taíno, African, and Hispanic.

It is recognized that the culinary was important for the miscegenation of Taínos, Africans and Iberians in the first decades of the Spanish colony and that created bases for the emergence of Creole culture.

In integrating cultures and flavors, indigenous, African, mestizo and mulatto women took care of producing that island’s “culinary alchemy”, which experts consider a mixture of cultures, which is part of the Dominican Republic’s tourism offer to the world.

From the aboriginal tradition comes the frequent consumption of cassava, which has bequeathed until the last generations the emblematic casabe (cake prepared by tainos based on cassava), fundamental food for the first Spanish colonizers that today is offered in gourmet versions.

The diet of the natives was sober and vegetarian. The Tainos did not use fats or oils and consumed raw, roasted or cooked food.

The African slaves brought bananas, plantain, guandules, sweet potatoes, sesame seeds, sweet potato, malagueta and instruments such as the “pilon”(pilon is a tool used by Dominicans to crush garlic and other seasonings for cooking) and forms of preparation such as sofrito to the island.

Coming from Africa is the mofongo, whose voice seems to come from Cape Verde, where the word cufongo means “corn ball”, is a dish that is very demanding by Dominicans and foreigners in residences and restaurants.

The “chenchén” (mashed corn) finds its possible ancestors in African dishes such as “sadza” and “nshima”. Leaf cakes, so “Dominican”, and the stew rolls have relatives in Africa. Besides, the sancocho also has versions in the west of the distant continent.

Corn is an important ingredient in Dominican cuisine, based on delicious sweet dishes such as chaca, arepa or cornbread.

The food consumed by the Dominican is that of the slave that was released and that an example is the yam, very important in Africa, where they hold a fair of this product and reward the one who grows the largest.

The preference for white rice is customary in Guinea, where the daily consumption of meat and lard has also been inherited.

The sauce prepared with tomatoes and other ingredients, known as a marinade, also has its genesis in Africa. There it is used to dress certain foods, as in the Dominican Republic.

What type of food is served in Punta Cana?

The menus of restaurants and hotel chains in the main tourist areas of the country to find dishes of Creole gastronomy.

These offers give a distinctive stamp to the tourist destinations most frequented by foreigners and Dominicans.

The Most Popular Food in The Dominican Republic 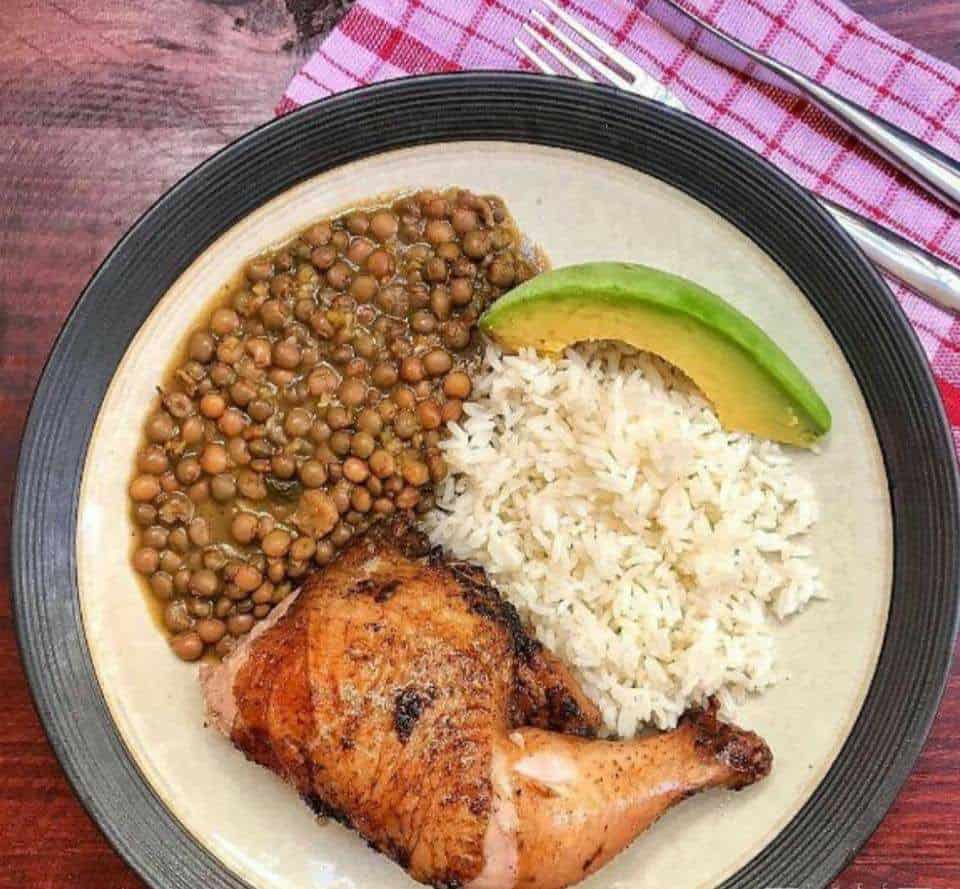 The “flag”, a dish of great protein value composed of rice, stewed beans, and meat, is the most popular food in the Dominican Republic and is part of the Creole gastronomic identity that transcends inside and outside the island.

The importance of the “flag” “is not given by its rituality and social relevance, but rather by the use of ingredients easily accessible by its ease of preparation and frequency of consumption.”

According to data provided by executives of the Dominican Society of Allergy In the Dominican Republic, cow’s milk and eggs are the foods that most affect the development of allergies, followed by seafood and fish.

There is a false belief in pediatricians that children are allergic to lactose, when in fact it is milk protein. A big problem in the causes of allergies is the fact that preservatives and dyes are almost everywhere food, and this is a fact that occurs globally.

The Typical Breakfast in the Dominican Republic

Dominican Mangú is one of the most common recipes in Dominican cuisine and is the favorite dish for Dominicans at breakfast time.

The Dominican Mangú comprises boiled green bananas, which are then mashed with the water in which they have been boiling.

The Dominican Mangú is popularly called “los tres golpes” (three strikes), which means mangú with cheese, salami, eggs and then topped with sauteed or fried onions.

The “Pico y Pala” (feet and neck of the chicken) is a byproduct of great demand among Dominicans to make soup.

“Pico y pala” is one of those foods that became popular because of the economic, the tasty and because it helped to shovel the difficult economic situation that has accompanied the Dominicans in some times, They were considered as waste or as leftovers, this service was generally, from very cheap to free.

This is not a meal that is served in hotels or restaurants, rather it is a popular dish in the humble Dominican class because of the economic results.

Dominican cuisine is rich in fresh flavors, and for those who occasionally need to sweat with a spicy dish on a hot Dominican day, the perfect solution is sour orange, this is a fermented “vinegar” based on juice sour orange and herbs and seasonings that are added to soups and broths.

The main ingredient of typical Dominican sweets is, without a doubt, coconut. This is thanks to that its unmistakable flavor gives a special touch to each dessert. Its versatility and rich flavor are undeniable.

the Dominican sweet beans are prepared based on beans, cow’s milk, sugar, sweet potatoes and, depending on the person who makes it, coconut milk; a country brand that prepares mostly for Easter.

The Majarete, is a light dessert made from corn cob, coconut milk, vanilla and sugar.

Another dessert is the Arepa, although in Panama, Colombia and Venezuela it is made, which is prepared in our country, is totally different. Dominican Arepa is based on sweet cornmeal. Previously it was cooked with wood or charcoal lit on the lid.

The typical Dominican regional food is very varied and popular, each region has its own seasonings and popular dishes, for each person who travels to a certain city is a must try and enjoy the delicious cuisine in that place.

Yaniqueques: You go to Boca Chica and the first thing you see on the trays of the food stalls is the unmistakable color of the large, round Yaniqueques that, made with wheat flour, provoke the palate. If you don’t try it, at least you have to take a picture of it.

Chenchén: This is a dish made of thick, bitter corn flour, consumed throughout the southern region of the country, especially in San Juan, Azua, Pedernales, Bahoruco and Elías Piña. Its firm consistency serves to easily differentiate it from chacá.

Hand arepitas: Roasted, made in a traditional way with corn flour and wrapped in banana leaves, the arepitas de mano or burén can only be found in Baní, head municipality of the province of Peravia.

Domplines: The boiled wheat dough does not have much flavor, but the filling or sauce that accompanies it (usually codfish stew with red sauce) makes domplín one of the most sought-after dishes of cocola origin in San Pedro de Macorís.

Panecicos: If you are going to San José de Las Matas (Sajoma) It is a crime not to stop at the “enramadas” where the traditional panecicos made with yucca and chicharrón are made. Mara many, this is the real Dominican Creole bread. In the South they make them with guáyiga and coconut flour.

Stewed goat: The particular oregano flavor that many people believe only the “liniero” goat has attracts visitors to Montecristi, Dajabón and other border provinces.

Yaroa: This bed of chips or ripe banana, with shredded meat, tomato sauce and mayonnaise, topped with cheese, is a typical dish very much in vogue in Santiago.

Arepa: Many travellers ask for the Creole arepa of Polo, in Barahona, and the salty and sweet arepa of Jarabacoa, at the side of the road that leads to the centre of the Vega municipality.

Casabe: If you want to try the most famous cassava in the Dominican Republic you have to go to the municipality of Monción, in Santiago Rodríguez. If you want them with flavors (aniseed, almonds, basil, etc.), the appointment is at the entrance of Santiago, in the enramada of Casabe Gourmet San José. And if you like them with coconut, try them in Los Quemados de Mao (Valverde).

Mabí: The fermented Indian vine mabí is tasted in a special way in Hato Mayor and El Seibo. In this last province they also prepare them from corn, cane and tayota.

Chacá: Sweet ‘caquiao’ corn made with milk is the most consumed dessert in the Southwest, especially during Holy Week.

• The yucca starch puff pastry in the northern zone.

• The roquetes of the Santo Cerro (La Vega).

• The cashew seeds on the road to Yamasá and Villa Altagracia.

• The sausage from Monte Plata.