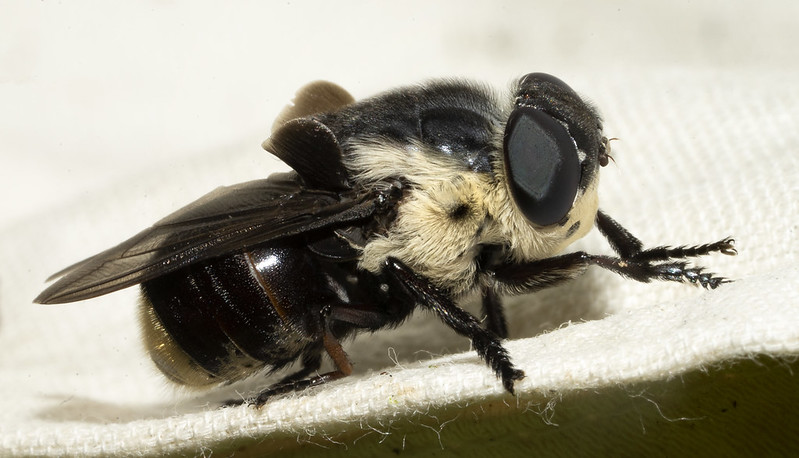 The bot fly is a species of a parasitic fly, this type of fly has a stage in which it is converted into a larva, this stage is infamous for many stories of people infected with this larva buried in their skin. The bot fly is any fly of the Oestridae family.

This type of fly is also called “death fly” because of the terrible infection its larvae can cause.

Many people living in other areas usually become infected while traveling to places where bot flies are present. In the Dominican Republic, no cases of bot fly infection have been reported.

In my experience living in the Dominican Republic, I have never seen this type of fly, nor have I heard of any cases of human infection by fly larvae.

The bot fly looks like a cross between a fly and a bee and has a striped, hairy body with a metallic color.

How does a person get infected by a bot fly?

Females of botflies lay eggs in blood-sucking arthropods, such as mosquitoes or ticks, to reproduce.

Infested Arthropods lay the egg larvae when biting a human or some other mammal.

What kind of flies exists in the Dominican Republic?

The green or bluebottle fly is a dipteran of the family Calliphoridae, with a bright green or metallic blue thorax and abdomen. It is one of the largest species and in the adult, stage feeds on flower nectar and liquid substances from excrement and corpses.

These flies fly in clusters, need warm places to hibernate and often fly near windows attracted by the lights of sunny winter days.

Reproduce in areas where fermenting residues are found (fruits, vegetables, beer, vinegar). Larvae feed on bacteria and yeast from rotting fruits and vegetables. They can also be found in some drainage areas and on dirty cleaning utensils.

House flies are carriers of disease and can infest all types of facilities. They are attracted to all types of food, including food for human consumption or pet food.

They breed in moist decaying plant matter, uncovered garbage or pet food. At night they prefer to rest near food sources.

They are usually found in sewage beds, where the larvae feed on organic matter that they extract from sediments.

They are commonly found in sewers and pass into buildings through drains. They have a very slow flight and tend to spend a lot of time perched.

They are usually the first to appear in the presence of dead meat, so they are considered an important vector for the dissemination of pathogens.

Larvae live and develop in any type of decomposing organic material or excrement.